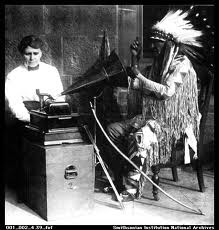 Born this day in 1838, Alice Cunningham Fletcher,pioneering anthropologist, author, and an advocate for Indian reform and Indian education. Best known for her field work of North America, mostly of the Omaha in Nebraska. In 1873, Fletcher was one of the founding members of Association of the Advancement of Women.
Fletcher began her studies of Indians of the past, but as her work progressed her work turned towards the present, their customs, music,and language. Working with others, Fletcher transcribed hundreds of Plains Indian songs.
Fletcher was an consultant to President Cleveland about the "Indian Problem". She was appointed by Congress, "oversee the allotment process of lands to Omaha, Nez Perce and Winnebago Indians." She helped write and get passed legislation which "...gave each Indian legal title to a plot of land and also granted them citizenship"
Now to list Fletcher's work, I see why her nickname was "Her Majesty".
In 1890, Fletcher was the first woman recognized as Fellow at Harvard University.
Lobbied Congress for the protection of Indian Ruins which failed but became to prototype of the Lacey Act in 1906.
A member of the American Association Advancement of Science in 1883.
A founding member of the American Anthropological Association.
First woman president of American Folklore Association.
"In 1911, The Omaha Tribe, co-authored with Francis La Flesche, an Omaha Indian was published. It is still considered to be the definitive work on the subject."

Living with my Indian friends...I found I was a stranger in my native land. As time went on, the outward aspect of nature remained the same, but change was wrought in me. I learned to hear the echoes of a time when every living thing even the sky had a voice. The voice devoutly heard by the ancient people of America I desired to make audible to others (as quoted in Temkin 1988:99).