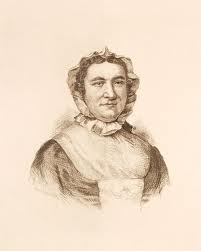 Born this day in 1693, Mary Spratt Provoost Alexander,businesswoman of New York. In a time which held with the idea that women were unable to work in business....one of the most successful and wealthiest business persons of the colonial period of the United States was Mrs. Alexander of New York City. Running an importing and merchant of a dry goods from "the Emporium." And one must point out that Mrs. Alexander was a "working mother"; running her business and giving birth and rearing her lovely family was all in a day's work. One of her first "business ideas" was installing the very first flagstone walk in New York- in front of her business and so her clients could park their carriage a get out without walking in dirt! Mrs. Alexander also learned much about healing herbs and salves which were sold in her store. Mrs. Alexander inherited her business from her first husband who died early in their marriage and her second marriage to Alexander was a happy one- he a lawyer with a political career which she supported. Her oldest son ran the business with
Posted by beingwoman at 4:39 PM