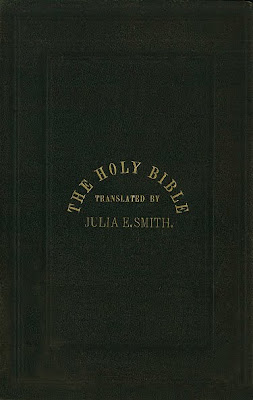 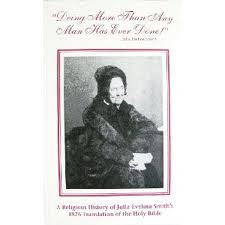 Born this day in 1792,Julia Evelina Smith, and author, suffragist.
In the 1840's, William Miller claimed the world would end and many took him at his word. Not Julia Smith, this event spurred her to translate the Holy Bible written from its original languages of Hebrew and Greek into English, a literal translation. Making Smith the only person to undertake such a task and accomplish it alone, without the assistance of anyone else. For example, when the King James translation began 47 men were appointed and seven of them died before the job was done. Julia Smith, all alone without the asstance of anyone wrote her translation. And she was the first woman to ever translate the Bible.
Smith self-published her Bible translation in 1876,printing 1,000 copies. Many scholars agreed with much her translations because they were truly literal. Even today, Smith's translation is respected.
Julia and her sister, Abby,were the last in the family to own and run farm in Glastonbury, Conn.(being the last two surviving their parents.) In 1875, their farm taxes were raised, but none of the other farms in the county taxes were raised and all of the other farm owners were men. Abby requested to speak at the town hall meeting, she was refused. The Smith sisters refused to pay their taxes until they had a vote-"taxation without representation!", Abby gave her speech outside town hall on the back of a wagon to a large gathering crowd. Abby's speech was printed in the Glastonbury newspaper and the story was then reprinted in newspapers throughout the country. Their cows were sold by the tax collectors and the mail poured in supporting dear Abby and her cows.
Julia wrote a book about the event "Abby Smith and her Cows" They became quiet famous these two Smith Sisters.
Five years later, Abby died. And Julia sold the farm and married her sweetheart, Mr.Amos Parker, they were 86 years old. Julia sold the family farm and bought a new home for her new married life, in the town of Parkville. Julia died ten years later. She requested to buried in the family plot with just her maiden name on the head stone. Mr. Parker lived to the ripe old age of 102.
Posted by beingwoman at 10:46 AM