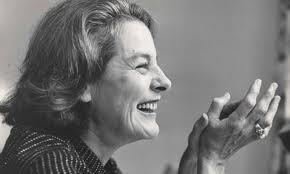 Born this day in 1912, Mary McCarthy, author, critic. McCarthy wrote the novel, The Group published in 1963 and landed on the York Best Seller List the same year and remained there for two years. The Group follows the lives of eight girl friends after they graduate from Vassar College in 1933. McCarthy was also in a famous feud with playwright Lilian Hellman. During an interview on The Dick Cavett Show in 1979
McCarthy, "provoked Hellman when she famously said on The Dick Cavett Show: every word [Hellman] writes is a lie, including 'and' and 'the'."
Hellman sued, but the case was dropped when Hellman died in 1984. McCarthy was awarded the National Medal for Literature and the Edward MacDowell Medal. She was also a member of the National Institute of Arts and Letters.

On this day in 1913, Tiny Broadwick became the first woman to parachute from an airplane.
Posted by beingwoman at 7:26 PM