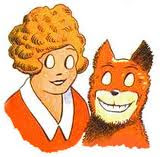 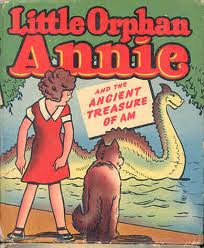 On this day in 1924 Mr. Harold Gray's new comic strip, "Little Orphan Annie" made her newspaper debut in the New York Daily News. Unlike the popular musical, "Annie", everyone is familiar with today. The comic strip star was more of super hero-saving the world with her her friends, Daddy Warbucks and Sandy, her dog. Little Orphan Annie was "saving the day" on endless train of adventures. "Gee whiskers" and "Leapin' lizards!" Annie's favorite sayings. The creator, Mr. Gray, started Annie's character as a boy! But, one day he met a little girl on the streets, she looked like a "ragamuffin with bright red hair" and then he knew this was the inspiration for his new comic strip character- Annie. There were over forty male comic strip characters and only three female.
Annie was kind, helpful, plucky, generous,and optimistic. Ready to take any bully, be they a neighborhood gang or some evil doer trying to take over the world. Now the "bad guy" changed with Gray's politics, but Annie was there with her inner compass that had a strong sense of right and wrong.
Little Orphan Annie, had long run, out living her creator, Gray who died in 1968, the stripe went into re-run which last until June 13th, 2010 and by this date she was only carried in 20 newspapers. Annie was a great role model for girls and boys too. With her signature red curly hair, flame red dress and then those very unusual eyes "round white circles."
Posted by beingwoman at 11:11 AM