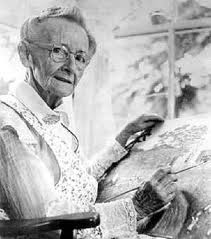 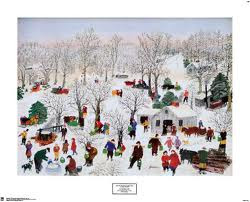 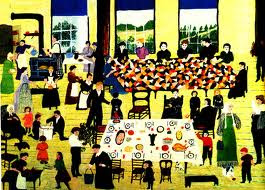 Born this day in 1860: Anna Robertson Moses or better known as Grandma Moses, folk artist. Moses lived, worked and then painted farm life. Her father's farm and then in marriage, farming. Moses gave birth to ten children, but only five survived infancy. Moses' first painting was due to need. Running out of wallpaper, she painted a scene, "Fireboard", it hangs today in the Bennington Museum in Bennington, Vermont. But, her true calling happened much later; after retiring and living with her daughter and son in law, Grandma Moses had to give up embroidering because of her arthritis and turned to painting. She was in her 70's. Then in 1938, art collector and engineer, Louis Caldor saw Grandma Mose's painting for sale in the drugstore window, and he bought all of them and then went to Moses' home to buy whatever else she had for sale. Then in 1939, her work was included in, "Contemporary Unknown Painters" show at New York's Museum of Modern Art. And as they say," the rest was history!" Grandma Moses met with immediate success; the following year her first one woman show in New York City.
Grandma Moses painted from memory, the memory of the many aspects of life on the farm. Moses had never trained as a painter- but that did not stop her from finding her extraordinary talent that is still as popular as ever. Scenes of snowy days, summer days, children playing, turkey hunts, Christmas on the farm. These slices of life spoke to many. Grandma Moses paintings are filled with joy and peace and love of home and family. It could be said these paintings are safe haven from the storms of life and isn't that wondrous.
Grandma Moses was so popular her work could be found a sorts of products from curtains to cigarette packs. The National Press Club called her of the most noteworthy women of 1950, National Ass. of House Dress Manufactures named her Woman of the Year in 1951. When Grandma Moses was 88, Mademosiselle magazine named her "Young Woman of the Year" When Philadelphia's Moore College of Art awarded her its first honorary doctorate degree, Moses had a cold and so she received the degree via the telephone.
Grandma Moses painted well over a 1,000 paintings, the seasons, the holidays, the community and love of it all so present in her work. her paintings have sold for over million dollars. Art Star!
Grandma Moses was the sweetheart of the folk art world. She lived the age of 101. On her 100th birthday, in 1960 Governor Rockfeller proclaimed it "Grandma Moses Day" for the state of New York her home state. Honored by a stamp in 1969. What a magical life. Moses inspired the world to rethink about age and what,who,when we are "old".
Posted by beingwoman at 7:50 PM