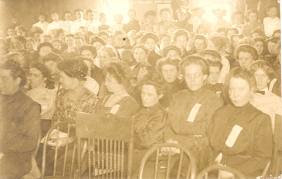 "If serfdom, peasantry, and slavery have shattered kingdoms, deluged continents with blood, scattered republics like dust before the wind, and rent our own Union asunder, what kind of a government, think you, American statesmen, you can build, with the mothers of the race crouching at your feet...?

On this day in 1901: Anna Edson Taylor,"... went over Niagara Falls in a barrel, the first person to survive such a stunt." And I say of course a woman survived!
Posted by beingwoman at 1:30 PM