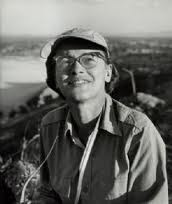 On this day in 1965, Dickey Chapelle died in the battlefields of Vietnam. An American photojournalist, and war correspondent during WWII and the Vietnam War. Dickey Chapelle was a petite woman and her signature uniform: army fatigues, Australian bush hat, harlequin glasses and pearl earrings. Chapelle's calling was in her own words, "eyeballing history." or in the action. Chapelle was outspoken eccentric, with a voice like a ``marine drill sergeant.'' She would go beyond the call of duty; following the troops into the war zones to get the real story. But she had to fight her way into the war zone. Ms. Chapelle's first opportunity to go into battle was during World War II, following the Marines into the Battles of Iwo Jima and then Okinawa. Chapelle learned to jump with the paratroopers- she usually traveled with the troops. This tiny lady received many awards and the respect of the military and the journalism community.
While following a platoon on patrol on the front line, a land mine was set off by the soldier in front of her- Dickey Chapelle became the first woman to be killed in action and the first photo-journalist to be killed in the Vietnam War. Dickey Chapelle's courage gave courage.
Posted by beingwoman at 11:26 AM