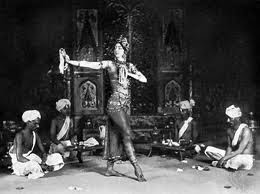 Born this day in 1877, Ruth St. Denis, a pioneer of American Modern Dance. Co-founder of "Denishawn Dance Company" with husband, Ted Shawn. Their students read like a "who's who of modern dance", Martha Graham, Charles Weidman, and Dois Humphreys to name drop a few. St. Denis popularized modern dance as a performing art. She also helped create the first dance program in the United States in 1938 at Adelphi University. St. Denis began her career as a Dime Dancer(slang leg dancers) and Vaudevillein 1892. With the dawn of a new century beginning, St. Denis concepts of modern dance were influenced by the Eastern tradition of dance, Indian, Egyptian, Japanese, Mythology and Mysticism. One of her more famous dance, Radha was based in Indian culture,it was also known as The Dance of the Five Senses .(as seen in the above photographs) Ruth St. Denis was an amazing artist. She was inducted into the National Museum of Dance, C. V. Whitney Hall Of Fame in 1987.

On this day in 1869, Elizabeth Cady Stanton, became the first woman to testify before Congress. (A leader in the Suffrage Movement)
Posted by beingwoman at 11:28 AM