June 22, Days that try our souls 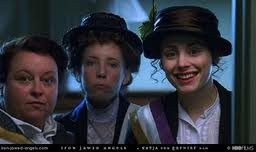 On this day in 1917, ten suffragists were arrested for picketing at the White House!
Why? The reason given by the police via the White House, obstructing traffic.  The real reason goes back to the fact women wanted their voices heard in the form of voting. "Taxation without representation," was their battle cry.
I had the honor of working on a film about women's suffrage, "Iron Jawed Angels" (HBO released 2004).  It was one of the steps that lead me to understand exactly how serious and important Women's Rights are to our society.  This film follows the story of the Suffrage Movement through the eyes of Alice Paul and Lucy Burn.  The two women who changed her-story by joining the movement and giving a fresh and strong voice to women's suffrage.  I would like to share at this point- please check out this film.  It is well done and very powerful.  There is star power Angelica Houston, Hilary Swank to name a few. Swank plays the role of Alice Paul. www.ironjawedangels.com  Great photos (with me in some of them)and dialogue about the film and the heart of the struggle of suffrage in the USA.  And the only other film at this point that depict the Women's Suffrage Movement?? "Mary Poppins"  That's correct.  And as Mrs. Banks marched around the house with her banners and then realizing Mr. Banks would soon be home and "We know how much the Cause upsets Mr. Banks."

Now, back to our headline. The Suffragist protests began January 10, 1917 and the arrests began June 22,1917. Everyday except on Sunday there were women holding up banners that shared their ideals and allot of those ideals came  straight from President Wilson's speeches:
"We shall fight for the things which we have always carried nearest our hearts--for democracy, for the right of those who submit to authority to have a voice in their own governments."  "Democracy Should Begin at Home"
These women were teachers, factory workers, stay at home moms, women of means, wives of congressmen, writers, artists-women from all walks of life.
After their arrests, the suffragists were brought before the judge who fined them ten dollars. Which they refused to pay.  The White House thought they could "nickle and dime these suffragists out of protesting."  The first mistake was thinking that the heart of the movement could be stopped with money matters. Since, they refused to pay- the women were sentence to prison or the charges in the beginning were sometimes dropped.
And these arrests did not stop the protests at all.  And so it happened the White house who wanted to be rid of the bothersome women who stood outside reminding President Wilson, the Congress, and the Senate that their involvement in World War I was based on the idea that all peoples should have the rights of democracy....but what about American women?  Women are People.
Throughout the next several months women were arrested and some were released but then the courts began to lengthen the sentences and for Alice Paul who was arrested in October of 1917; she was sentenced to seven months!  For obstructing traffic?  Alice Paul was in solitary confinement for  two weeks, beaten, and then Paul went on a hunger strike.  The guards decided to try violence to force women to conform. Chaining them, beating them, pinching them, choking them, striping them of their clothing, crushing their heads against walls....as Paul's  hunger strike continued other women in prison joined the hunger strike.  For fear that Alice Paul would die- they force fed her- sticking a tube down her throat and filled her belly with liquid protein.  Raw eggs and milk mostly.   They threaten she would sent to St. Elizabeth's Mental Hospital.  She was tortured also by flashing strong lights every hour on the hour.  Paul stood her ground.
Word of what was happening to these innocent women in Occoquan Workhouse (located in Northern Virginia) was reported in the newspapers.  The public support grew for the suffragists and on November 27 and 28 of 1917 all the women were released including Alice Paul.  March 18, 1918 the D.C. Court of Appeals found the arrests, prison time unconstitutional.
Today women are fighting for their rights again.  Never forget the Constitution begins with these three words, "We The People, "  Not "we the men,"
Women are People too!

Posted by beingwoman at 9:30 AM