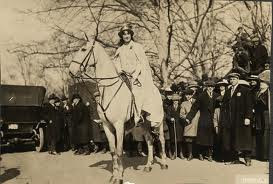 On this day March 3, 1913,  Washington DC was host to the first parade in support of  Woman's Suffrage Movement. 8,000 women and men and children marched that day. Sadly, mobs were formed to harm and stop the parade with the use of violence and very rude commentary. And even though Alice Paul (leader of the suffrage movement)  had a legal permit and supposed protection from  the police force. The police did nothing to stop the violence. 200 were injured and Army troops were brought in to stop the mobs. The outcry from the public was in support of the Women's Suffrage Movement  and against the police for allowing such violence. The chief of police fired. And DC set up a committee to investigate who was behind the mobs.
The subject of women's suffrage was back in the public's mind and  with their support.  This parade was the symbol of a new beginning in the Women's Suffrage Movement in the United States.
There are two suffrage ideals the suffragettes and the suffragist.  suffragette: uses a more demanding, and  aggressive actions for right to vote. suffragist: a person who follows the protocol to bring attention to a woman's right to vote.
Reminder: March 8th is the 100 year anniversary of International Woman's Day.