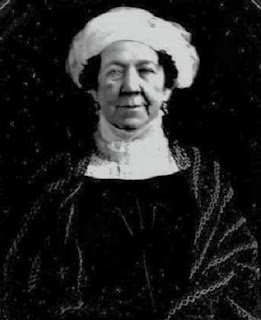 Born this day in 1768, First Lady Dolly Madison, married to the United State's 4th President James Madison. Dolly Madison is remembered for grace and hospitality as First Lady.  It is said that Madison improved her husband's popularity with her grand hostess skills.

But her life was not an easy one, her first husband John Todd and son William  died  in the yellow fever epidemic in 1793. Leaving Dolly a widow and with no means to raise their older son John Payne.
Dolly met James Madison through a mutual friend. Madison was seventeen years her senior and a bachelor.  They married and started a political career that took them to the White House.
Dolly's son never found a profession and in 1830 was thrown into debtors prison.  The Madison's mortgage their plantation to pay his debts.
And after James  Madison's death, Dolly moved to Washington DC leaving her son Payne to run the plantation. But Payne was unable to hold to the farm due to his alcoholism.
Dolly was living absolute poverty. And sold James Madison's papers to Congress. Dorathea Dandridge Payne Todd Madison died July 12th, 1849 at the age of 81.
The photograph of Dolly Madison is by Matthew Brady.
Posted by beingwoman at 10:38 PM