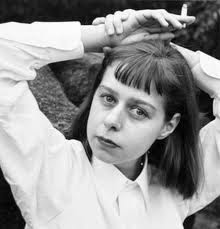 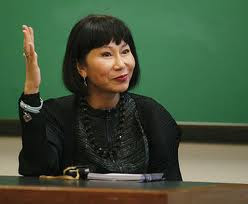 Born this day in 1902, Kay Boyle,American author, educator, and poet. Boyle was also a political activist. Boyle's novel,Death of a Man, written in 1936, was a warning of Nazism, which she was aware of living in Europe at the time. Boyle was also blacklisted during the McCarthy Era in the United States. Accepting the position in 1963, Boyle taught creative writing San Francisco State College until 1979. During this time, Boyle protested the Vietnam War and was arrested twice and imprisoned. Boyle also traveled to Cambodia in 1966 as part of the "Americans Want to Know" fact-seeking mission. A prolific writer novels, short stories, children's books, essays and translations. And then Boyle's poetry(11 volumes) and like her proses there was always the search of true love. Boyle won two O. Henry Awards for short stories, and Guggenheim Fellowships and was given a lifetime achievement award from the National Endowment for the Arts.

Born this day in 1917, Carson McCullers,American author. Growing up in the South influenced McCullers work, many labeled her style, Southern Gothic, but McCuller said, Southern Realism. But,as a child she studied the piano and at age 17, with an acceptance to study music at Julliard School of Music in NYC, music was her first talent. But the money to pay for school was lost. Odd jobs and writing classes and McCuller decided on writing. Her first work, Wunderkind published in Story Magazine. Marriage to Reeves McCuller an ex-soldier and back down south to North Carolina and there McCuller wrote The Heart is A Loney Hunter published in 1940. This novel, was adapted into a successful film in 1968. McCullers poetic style lent itself to dialogue, her novel The Member of the Wedding, was adapted into very successful play on Broadway and Reflections In A Golden Eye was also adapted into a film. Carson McCullers personal life was tragic,and because of a fever at the age of 15, she would suffer series of strokes throughout her life. But, as John Huston wrote,"But there was nothing timid or frail about the manner in which Carson McCullers faced life. And as her afflictions multiplied, she only grew stronger."

Born this day in 1952, Amy Tan, American author. Another American writer whose novel, The Joy Luck Club, a best seller that has been translated into 35 languages and was made into a feature film in 1993. Other best selling novels,The Kitchen God's Wife, The Hundred Secret Senses, The Bonesetter's Daughter and Saving Fish From Drowning Even though Tan's work is a reflection of her Chinese heritage, the voice is universal and speaks of family relationships everywhere.
Posted by beingwoman at 11:17 AM