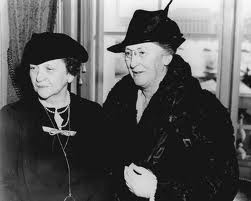 Born this day in 1874, Mary "Molly" Dewson, one of the United States great political leaders. Dewson's class-mates at Wellesly College believed she would be the first woman elected president. Out of college her first job was secretary of the Domestic Reform Committee of the Women's Educational and Industrial Union. Listed below are some of Dewson's career highlights: Parole department of the Massachusetts State Industrial School for Girls. Executive secretary of the Minimum Wage Investigative Committee. Dewson was another "right hand" for Roosevelt and the reforms needed to put all Americans in a safety net. Dewson's work for Social Security, and all the services connected to it made her the first "female political boss" in the United States. I include a link to this speech because as I read it....I felt the points made are as true today as they were in 1938.


•"This Social Security - What Is It?" An address by Mary W. Dewson before the Women's City Club of Boston, Massachusetts February 17, 1938.
Posted by beingwoman at 8:40 PM