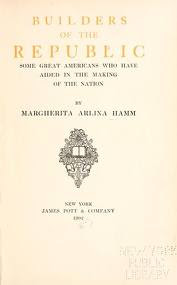 Born this day in 1867, Margherita Hamm, noted journalist and suffragist. Hamm was the first woman to cover a war( Spanish-American War) from the front lines. Described as energetic and attractive, Hamm's first job was a reporter with the Boston Herald. A move to New York City and a marriage to American Vice-Consul to Amoy China- which put Hamm in a well positioned to be a foreign correspondent for the New York newspapers when the Sino-Japanese War broke out in 1898. Hamm wrote about travel and High Society and of course the military. Sadly, Margherita died of pneumonia at the young age of 40.
Posted by beingwoman at 1:09 PM