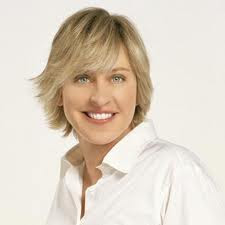 On this day in 1997, as 42 million television viewers watched "Ellen" revealed she is gay.

Born this day in 1877, Alice B. Toklas, author and mostly known as the life companion of Gertrude Stein. Tolkas met Stein the first day she arrived in Paris, France. I believe it was love at first sight.  Together they hosted the Saturday night Salons at their now famous address,27 Rue de Fleurus.  Their guest list was the who's who of the avent-garde of the early 20th century. To drop a name or two, Picasso, Pound, Hemingway. Stein would sit and speak her mind- and Alice, her muse, would bake,cook and listen.  Alice typed each page Gertrude wrote.  Stein's most famous book was The Autobiography of Alice B. Toklas published in 1933. Toklas outlived her dear one by 20 years. She wrote a couple of cook books and magazine articles. Sadly, Stein's family withheld the famous Cezanne painting Gertrude willed to Alice, making her living conditions...humble.  If they had married; this story would have eneded happily.

I wonder if Ellen selected the date of Alice Toklas's birthday as an homage to two women who lived their gay lifestyle out loud in the early part of the 20th century.
Posted by beingwoman at 9:38 PM