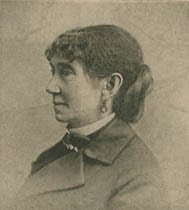 Born this day in 1825, Mary Jane Howes Holmes, best-selling author of the 19th century. Holmes publishers, crowned her,"Queen of the Human Heart". Street and Smith's newspaper "The New York Weekly", started running her stories in 1859. She was hired because the newspaper needed a "boost" which she provided, 50,000 more the first week! With the serial novels, "Marian Gray" Holmes work not only dealt with female romance style, but her characters are compelling and lived in their times, themes such as the Civil War, Slavery. 39 novels and her first novel sold over 250,000 and she sold 2 million books in her lifetime. Critics of time, did not give full credit where credit was due because "that was the way" with women and what they produced. When in reality, her books are fantastic and still compelling today as Holmes novels are experiencing a revival.
Posted by beingwoman at 8:22 PM