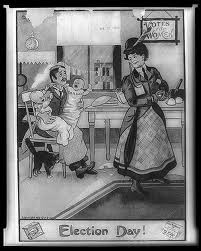 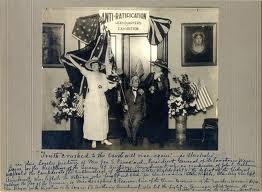 Born this day in 1838, Kate Gannett Wells,anti-suffragist. There was some women who did not support suffrage and Wells was one of them. And like most "anti"(word used by suffragists at the time of the movement), Wells wanted to work outside the home, she did not want to have children, she found being a wife, a mother and running a household completely un-interesting and unfulfilled. Wells wanted to be a minister in her father's and brother's church, the Unitarian Church. It is also rare to have any documentation of the life of an "anti" and their personal feelings. Wells wrote to her brother Will weekly and shared her feelings and thoughts about her life. William Garrentt's Papers are archived at Harvard College. Garrentt was a founding name of Harvard College and well known in Boston, MA. Most of Wells friends and family were suffragists and very surprised when Wells spoke out against The Suffrage Movement.

Woman suffrage was "inexpedient," Kate told the legislators, "until the highest type of morality and the clearest sense of justice and the widest reaches of law in its theoretical and practical applications are reached by all women." Kate conceded that "Women now do generous, wise, and lofty deeds, "but they also "do mean, foolish, despicable actions,—oh, how mean! how bad!" She beseeched the gentlemen of the legislature to "Withhold from us the duty, necessity, right of suffrage, whichever it may be called, until you can have only noble, honest women for your voters and legislators

Kate feared that educated, refined women would choose not to exercise their right of suffrage while the "unintelligent and depraved women" would flock to the polls to help their brothers force the state to give them whatever they needed. "Once let the great mass of uneducated women be added to the great mass of already uneducated men," Kate declared, "and the state will slowly but surely be shaken under the varying demands made upon it for bread, work, money, leisure and all kinds of laws to favor all kinds of persons."

Yes, bigotry was a prime reason to stop the Suffrage Movement as it was for Slavery, Civil Rights. I will also point out that Kate Wells thought that Slavery was a necessary part of society. Anytime there is a issue about Human Rights there are those who are willing to profit off the pain and suffering of the people who are harmed by the injustice. And somehow feel perfectly entitled to it.

Wells found her way out, "of the house". Philanthropic work in women's education and tending to the poor (and if they were indeed lifted up what would the ladies do for volenteer work!)
The old saying, "Do as I say, not as I do." applies to most women who rejected suffrage. They themselves, were lawyers, writers, working women outside the home. But, as the saying, they viewed other women as unable to handle it. Sad, so sad.
Posted by beingwoman at 9:13 PM