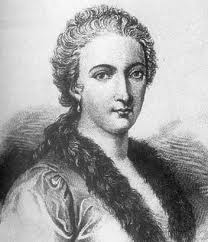 Born this day in 1718, Maria Gaetanna Agnesi, mathematician best known for the curve "Witch of Agnesi". (pictures above)and philosopher. Agnesi born in Italy and was a child prodigy. By the age of nine she spoke, read and wrote in Italian, French, Latin, Greek, German, Spanish and Hebrew. She wrote the first book about differential and integral calculus in 1748. In 1750, Agnesi was appointed by Pope Benedict XIV chair of mathematics and natural philosophy and physics of Bologna.
When Agnesi was nine years old, she wrote an hour long speech in Latin about women's right to be educated.
Even though it would seem that Maria Agnesi would make a career in academia, her true calling was to become a nun. Maria joined the convent of the Blue Nuns at Milan to help the poor, homeless and sick. Maria spent the rest of her life at the convent fulfilling her true calling.
Posted by beingwoman at 12:29 AM