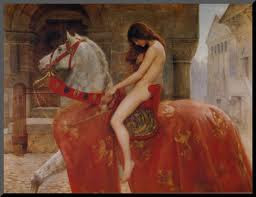 While researching women's herstory it is hard to find stories that date earlier than the 16th century. But, today's date does carry two- all the "today in history' had these exact words:
1531 "Women's Revolt" in Amsterdam: wool house in churchyard aborted But, what does that mean? wool house and aborted?? in a churchyard?
Well, the burgomasters of Amsterdam decided to build a storehouse for wool on The Holy Place (why was it Holy? In 1345, a dying man had just received the holy sacrament, and then vomited right back up and the vomit was thrown into the fire and in the morning when the coals were raked over the sacrament was found to be still a prefect white and in tact making this location, The Holy Place). So when in 1531, the government want to build this storehouse for wool in this very Holy Place... The pious women of Amsterdam petitioned the burgomasters not to commit this horror in The Holy Place. But, the burgomasters unmoved began to dig the foundation for the wool storehouse.
And on this night, so very long ago, 300 pious women with shovels in hand refilled the foundation dirt back into the holes dug that day. And this was, The Women's Uprising of 1531 or revolt of 1531.

We have another early date. On this day in 1678, Lady Godiva rode nude through Coventry,England in protest of taxes. Really, so when this event dates anywhere between 1012 to 1678 and to Godiva's nakedness...Godiva was said to have had very long hair that covered her nude body or maybe it was shift or a just a belt. And Peeping Tom is connected to this legend; he was struck blind for peeping at Godiva! And there are many, many, many women who enjoy being photographed butt naked while riding a horse. Now, if they were all eating that yummy Godiva chocolate while riding a horse.

Born this day in 1912, Chien-Shiung Wu, physicist. Wu was part of the team that worked on the "Manhattan Project", because of her expertise in techniques of experimental physics and radioactivity.
(She helped to develop the process for separating uranium metal into the U-235 and U-238 isotopes by gaseous diffusion).
Wu also is well known for her experiments that overturned the basic law of physics called parity conservation and revolutionized the study of particle physics
Wu, also a professor at Columbia, has combined scientific rigor with the joy and mystery of the creative spirit. She was nicknamed The First Lady of Physic.
Posted by beingwoman at 9:54 AM