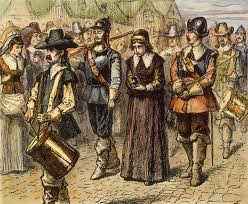 On this day in 1657, the Quakers arrived in New Amsterdam (New York).

On this day in 1660, Mary Dyer was hanged in Boston, Mass. Dyer was a follower of Anne Hutchinson. Quakerism was the faith that Dyer preached and was banished from Massachusetts. But, she did return.

She died a martyr, as she was hanged on Boston Common for the crime of being a Quaker in Massachusetts. Her execution is described by Edward Burrough in A Declaration of the Sad and Great Persecution and Martyrdom of the People of God, called Quakers, in New-England, for the Worshipping of God (1661).

On this day in 1993, Connie Chung joined Dan Rather as anchors of CBS Evening News.
Posted by beingwoman at 7:03 PM