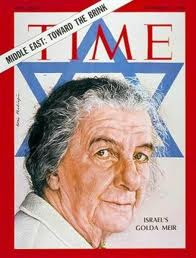 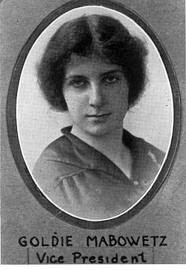 Born this day in 1898, Golda Meir, the fourth Prime Minister of Israel. How does a girl born in Kiev, Russia, whose family immigrated to Milwaukee, WI where she was raised and end up as Prime Minister Israel? It began with education, an education she stood up for when her parents wanted her marry. Fleeing to her older sister's(Sheyna Korngold) home in Denver, CO. It is there Golda's introduced to the Korngold's nightly intellectual discussions and debates on the events and ideals changing the world like, literature, women's suffrage, Unions, and Zionism. These evenings changed her life. Meeting her future husband Morris Meyerson. Returning to her family in Milwaukee and finishing her education, graduating in 1915. In 1916, she attended teachers college (Milwaukee State Normal School) and in 1917 graduating from college she taught in the Milwaukee public schools. All along as a member of the Labor Zionist youth movement. And it is now she began to speak at public meetings and host visitors from Palestine. 1917 is the year she agrees to marriage but only if they will settle in Palestine. This move was delayed by the outbreak of WWI.

1921 is the year they move to Palestine and join a kibbutz. Duties of farming and here her leadership abilities recognized and Golda was the Representative to Histadrut, (the General Federation of Labour.)

1928, Golda was elected secretary of Moetzet HaPoalot (Working Women's Council) which required a two year stay in United States as a emissary. Golda took her children to the US, but her husband stayed. Their marriage was of distance and they grew apart, but they never divorced.

1934, Meir moved through the ranks of the Executive Committee of Histadrut and becomes head of the Political Department.

1938,Mier is the Jewish observer for the Palestine at the Évian Conference, President discussion of the problem of the Jewish refugees fleeing Nazi persicution.
Very little help was given as the countries expressed their concerns and sympathy.

1948, homeland becomes a state, but before this can happen, the Jewish Agency concerned about the need to raise between 7-8 million from the American Jewish community. Mier traveled to the United States and raise 50 million dollars.
Ben-Gurion wrote that Meir's role as the, "Jewish woman who got the money which made the state possible"

1948,Meir was one of twenty-four signatories (two of them women) of the Israeli declaration of independence on 14 May 1948.

1956, Mier served as Foreign Minister under Prime Minister David Ben-Gurion. It is at this time Moshe Sharett requested the ministers to change their last names, to Hebraicize So Mrs. Meyerson became Mier, meaning illuminate.

1966, Mier retires as the Foreign Minister.

Prime Minister Mier met with world leaders to promote her vision of Peace in the Middle East. But, it became the time of violence. The 1972 Summer Olympics is known as the Munich Massacre. The Yom Kippur War. And even though her Party won the 1973 elections, Mier resigned April 11th, 1974, as she felt, "it was the will of the people." The burden of the unrest of the infighting in the Party and the border battles, took its toll.

1975, Mier published her autobiography, My Life


On this day in 1933Nellie Tayloe Ross took office as the first female Director of the U.S. Mint, appointed by President Franklin Delano Roosevelt. She continued as director of the Mint until 1953.
Posted by beingwoman at 3:27 PM