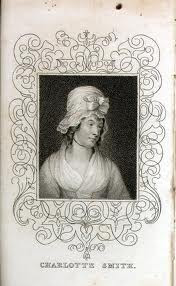 Born this day in 1749, Charlotte Turner Smith, first Romantic poet, and also a novelist. Born into a family of wealth that was then squandered by her father when her mother died. Because these circumstances, Charlotte's father married her off at the age of 15 to Benjamen Smith her senior by many years. It was not a happy union, but did produce twelve children. Sadly, many died before their first year and only six outlived Charlotte.
And Benjamin was also aggressive and violent. And ended up in debtors prison which is where Charlotte wrote her first book of poetry, Elegiac Sonnets. As a child Charlotte was creative and even in the mist of her motherly duties she found time to read and write and paint. The poetry was a great success. Though, the family was never stable, and was always moving to avoid debts. She was able to buy the family out of the debtors prison and keep them out of future stays.
After twenty years of a very unhappy marriage, Charlotte left her husband. But, because of the laws that bound women to their husbands and the husbands allowed by law, control over any of their property.
Charlotte also wrote novels which she did use her own life experiences to voice women's unfair rights. The Old Manor House, is considered her best novel. Charlotte Smith spoke of herself as a poet, she did also revive the English sonnet, and many of her novel established the conventions of the Gothic novel. In 2008, the entire collection of Charlotte Smith's writing were uncovered. Three books of poetry, ten novels and four children's books.. Smith's entire prose collection became available to the general public, when published by Pickering and Chatto.
Posted by beingwoman at 6:01 PM