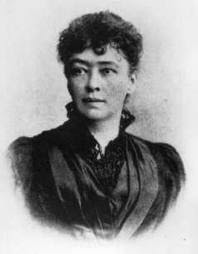 Born this day in 1843, Bertha von Suttner, author and peace activist for which she received the Nobel Peace Prize in 1905. Suttner was born into wealth and aristocratic society of the Austrian court, her name then, Countess Kinsky and in this world she was blind to the rest of the world.
At the age of 30, Suttner took a companion to the four daughters of the von Suttner family and it here that she falls in love with their brother. Suttner then travels to Paris to be Alfred Nobel's secretary, but soon returns to marry Baron Arthur von Suttner. Her family strongly apposed the marriage which gave them the liberty to live in Caucasus where they live for nine years, earning a humble living teaching lessons in music and language.
This the time, Suttner wrote Es Löwos, a poetic look of their life together. Then four more novels and then her first serious book,Inventarium einer Seele, or Inventory of a Soul. Here she takes stock of who they are and their life, the inner thoughts and outer input from what they read and this concept of achieving peace. World Peace.
A visit home to Austria, the family finally accepting of the marriage. It is here they learn of the International Arbitration and Peace Associational in London and of other organizations working toward of Peace instead of armed forces.
This influences her second serious book Das Maschinenzeitalter, The Machine Age Published in 1889. This book criticizing the many aspects of the times, fortelling the danger of exaggerated nationalism and armaments.

Suttner next book she wrote as a way to support the Peace League. Die Waffen nieder [Lay Down Your Arms], published late in 1889, follows a woman who suffers all the horrors of war and by researching the actual facts, the novel has a powerful impact on the reader, it struck a nerve and the reaction was huge.
And from this Suttner becomes an active leader of the Peace Movement. Putting her energy into writing about the cause for peace. Traveling giving lectures, attending world meetings of the congresses of peace and establishing peace groups.
With her husband they worked hard to set up Hague Peace Conference of 1899. The idea of Permanent Court of Arbitration so that war could be avoided.
International Peace Congress at The Hague met yearly. Meeting find solutions that avoided war and answered the issues peacefully without harm to human life and world.
Suttner died two months before the outbreak of WW I. And like she warned, the devastation was profound.

Oh if only Suttner's vision had come true and Hayes and Hoisington were not promoted to military generals but emissaries of Peace and Harmony of the International Peace Commission. Only if.....
Posted by beingwoman at 3:33 PM