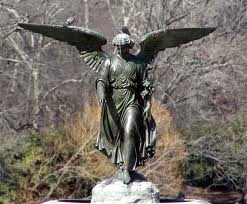 On this day in 1730 Miss Deborah Read and her husband Benjamin Franklin's marriage became a "common law" marriage. YES! Miss Deborah's mother did not approve of Franklin because he was traveling to England! So,in 1723 Deborah was married off to her mother's choice while Franklin was in England and this guy turned out to be the scoundrel. Disappeared with Deborah's dowry and never was heard of again. And who knew Franklin was the romantic and he stood by her, his true love. Read was unable to marry Franklin because of the marriage to the first guy. And so they agreed to a common law marriage. And they lived happily ever after. Electricity in a bottle!


Born this day in 1815, Emma Stebbins, American scupltor. Stebbins family was very supportive her artistic career. Studied under Henry Inman. In 1857 Stebbins made the move to Rome, Italy the mecca of the art of sculpture. It is here Stebbins met actress, Charlotte Cushman who became Stebbins life partner. Stebbins best known works are Angel of the Waters, 1862 which located in Bethesda Fountain in Central Park, New York. The Angel has appeared in books, plays, films and TV. Yes, she is the Angel in America. Stebbins other sculptures include: The monument of Christopher Columbus, located in Brooklyn Civic Center and Treaty of Henry Hudson with Indians. Stebbins and Cushman moved back to the United States in 1870. Stebbins was unable spent much in her studio because of the ill health of Cushman, who Stebbins lovingly cared for until her death in 1876. Stebbins died in 1882.


On this day in 1878, the first female telephone operator, Emma Nutt, began her job in Boston.

Posted by beingwoman at 9:42 AM