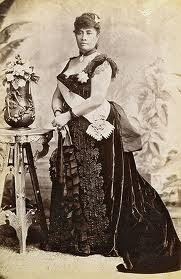 Born this day in 1838, Lydia Kamakaeha Liliuokalani, last reining queen of Hawaii, 1891 - 1893The United States felt "uncomfortable" about the changes Queen Liliuokalani wanted to make help the protect her people and country. So, the businessmen shared their concerns and the United States sent American troops to Hawaii. Overreacting, yes. To avoid any blood shed Queen Liiuokalani bowed to the troops. Later that year, 1893, President Cleveland viewed the take over of Hawaii unwarranted. But, in the end, somehow Hawaii became a territory of the United States in 1898. Queen Liliuokalani ruled the hearts of her people. The Queen died in Honolulu on Nov. 11, 1917. The beloved Queen Liluokalani was given a State funeral.

Born this day in 1948, Christa Corrigan McAuliffe, middle and high school teacher. And the first "Teacher In Space Project". McAuliffe was selected out of 11,000 applicants. The idea of a classroom in space was meant to reach out to children and engage them in journey of discovering outer space. McAuliffe had two 15 minute space classes. One, "The Ultimate Field Trip" would be an exploration of the space craft. And the second class, "Where We've Been, Where We're Going", which would discuss the reasons and benefits of space travel. This class room would be broadcast into millions of students. With one year to prepare for the trip, McAuliffe was not a full fledged astronaut, but the first civilian to fly into outer space.

On January 28th, 1986, along with the six other crew members, McAliffe boarded Space Shuttle Challenger....73 seconds into the flight the Challenger broke apart...all aboard were lost.
Because McAliffe was on board there were many children present at NASA launching pad in Florida and all the students ready to follow McAliffe's journey into space via television.  This space accident was truly heart braking to the United States.   McAliffe's complete joy as she set forth on her journey and then moments later, then our sorrow. But her joy of the journey of learning will never be forgotten.  Many scholarships, schools, science centers bear McAliffe's name.  On July 23rd 2004, McAliffe and all those whose lives that were scarified in space travel were given with the Congressional Space Medal of Honor by President George W. Bush.


On this day in 1867, the first "Girl School" was opened in Haarlem, Netherlands.