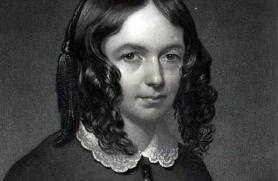 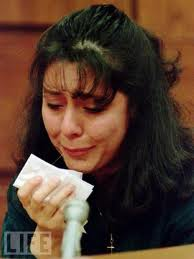 Today in her-story, Robert Browning began writing to Elizabeth Barrett in 1845; which started one of the literary world's most famous love stories. Elizabeth and Robert fought hard for their relationship. Barrett's father stood in their way,cruelly controlling his daughter, believing her to be mentally and physically weak. Ah, but true love prevailed.
In the end they did married, and so this piece of poetry was written.
"How do I love thee, Let me count the ways.
On this day in 1994, Lorena Bobbitt's trial began for cutting off her husband's penis.
Yes, after suffering another sexual attack, Lorena went to the kitchen for a glass of water...seeing the paring knife something flipped in her mind and she went into the bedroom and cut off half his penis. Fleeing the apartment, she drove away with it in her hand. Realizing this she threw it into a field. Flipping back into reality she called 911 and helped the police locate the missing part which was iced down and successfully re-attached to John Bobbitt. Lorena was found not guilty. They divorced in 1997. Today she is a hair stylist in Virgina
Posted by beingwoman at 4:08 PM