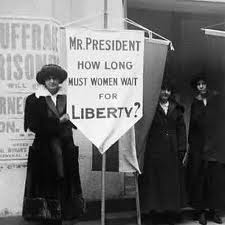 Born this day in 1885, Alice Paul. She was one of the driving forces for American women to gain the right to vote. Ms. Paul was a true suffragette: (a woman who actively campaigns for women to have the right to vote; especially one who takes part in militant protests)
Not many Americans know the full story of women gaining the right to vote in the USA.
We assume Susan B. Anthony and the women of National American Woman Suffrage Association gave many speeches and it just magically happened. The history books are very fuzzy and on exactly what did happened...
Alice Paul and Lucy Burn is what happened. These young women pushed the envelope. Braking with National American Woman Suffrage Association.(this is not belittle the tireless work of NAWSA)
They founded the National Women's Party See, Ms. Paul felt that politely writing letters and attending endless meeting was not fully helping the cause of suffrage for women and she was right!
Parades, lobbying Congress, and then staging protests in front of the White house; the NWP truly raised awareness.
Whenever there is change, there is fear and anger. And President Wilson growing weary of the protests in front of the Whitehouse that had been going on for about 8 months. It was decided that the protesters would be arrested for obstructing traffic in front of the Whitehouse. Fining "The Ladies" they would "nickle and dime" out of this idea of protesting. But, they refused to pay. Not what the Whitehouse expected and the judge had them jailed. IN prison women were striped of their clothing, beaten, denied their rights to a lawyer...the list goes on.
It took time for the public to find out what was happening to these mothers, school teachers, sisters, daughters and wives.
When the story finally got out- there was an out cry. Alice Paul went on a hunger strike.
These are some examples of the actions that lead to the passing of the 19th amendment in 1921.
I encourage everyone to read more about Alice Paul. One of America's great women. There are only two films that protray Women's Suffrage: "Mary Poppins" 1964 and "Iron Jawwed Angels" HBO 2003! The first is a comedic song. And the second follows the life of Alice Paul. Great film, I had the honor of appearing in this film.
Posted by beingwoman at 3:14 PM