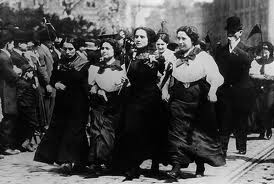 On this day in 1912,the Lowell Mills textile workers of Lawrence, Massachusetts began to strike. The "Bread and Roses Strike". The Polish women realized their wages were cut. They stopped the looms and walked out shouting, "Short wage, short wage!". The mill owners had cut all the women and children's wages to reflect the work week (by state law)was cut by 2 hours -56 to 54 work hours. No clean water, poor diets and bad living conditions, and then the Mills held their own dangers besides the long working hours. The average lifespan of a mill worker was age 22. The owners of these mills felt the women and their children did not have the ability to hold out for a successful strike. And the cruel measures the mill owners and police used to shut the strike down worked against them. Instead, there was an outcry of support from the rest of the country and the government. On March 12th the mill owners agreed to the mill workers demands. "Bread! and Roses, too"
Meaning RESPECT.