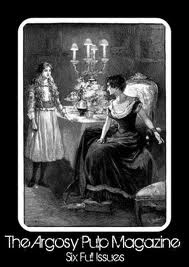 Born this day in 1814, English author, Ellen Price Wood. Wood began her career by writing stories for the magazines, Bentley's Miscellany and Colburn's. East Lynne was Wood's first novel, published in 1861. To say this novel was successful would be an understatement. It was translated into many languages and Leo Tolstoy journaled ,"Reading Mrs. Wood's wonderful novel In The Maze." The novel was adapted to the stage at least nine times and a 1931 screen adaptation was nominated for Best Picture that year. Wood wrote over 30 novels in her lifetime. In 1867, she launched the magazine Argosy. Wood used this publication to introduce new stories for which her public hungered. Wood remained editor of Argosy until her death in 1887.

This is the final paragraph of Mrs. Wood's obituary as it appeared in The Times:
"Of late years Mrs. Wood's health had been somewhat precarious, and she led a very retired life, almost restricted to the intercourse of intimate friends or relations. A sharp attack of bronchitis during the severe weather that followed Christmas completely prostrated her, and nothing but her indomitable will and natural energy permitted hope of her recovery. The sudden change at the beginning of the week was fatal to her, and she passed away about 4 o'clock on Thursday morning. Mrs Wood leaves behind her several sons, one of whom inherits the literary tendencies of his mother, and a daughter. Mrs. Wood's pen was active up to the last, and we believe that among her papers are two complete unpublished stories."

Now, to find her lesser-known novels or stage a new production of East Lynne!

Born this day in 1922, the grand and glorious actor, Betty White! We know her work from the television series, "The Mary Tyler Moore Show" during the 1970's to "The Golden Girls" of the 1980's and in May of 2010, at age 88, White hosted "Saturday Night Live"; their oldest host to date. It would remiss to not mention White's advocacy for animals. So Happy Birthday, Betty White. Thank you!
Posted by beingwoman at 2:58 PM