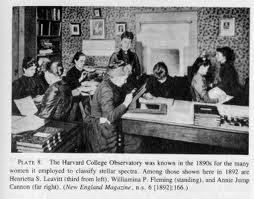 Annie Jump Cannon, born this day in 1863. Astronomer, theorist, first woman to receive a Honorary doctorate from Oxford University,and the first woman elected to the American Astronomial Society.
In 1896, Edward Charles Pickering hired Ms. Cannon to help complete the Draper Catalog which was "mapping and defining the stellar Heavens." Cataloging the photographic stars by temperature to 9.
Early on in the project there was disagreement on how to go about the cataloging. One system was too complex and the other simpler. Annie Cannon stepped in and created a third system which included ideas from both. "OBAFG--KM" Which they remember with the mnemonic. "Oh, Be A Fine Girl--Kiss Me!" And this system is still in use today. "O" being the hottest and "M" the coolest temperature.
Ms. Cannon, discovered 300 stars in her career. Nick name: "Cenus Taker of the Sky Society" She classified 230,000 stellar bodies. No one has topped it.
Posted by beingwoman at 9:14 AM