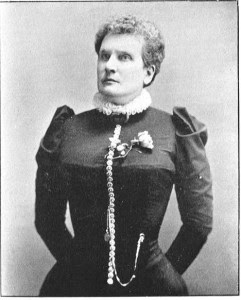 Born this day in 1840, Marilla Marks Richers, lawyer. Again, in a time when common knowledge believed there were no female lawyers, but here in the history of women, we have Richers. Raised in a family of "free thinkers" in New Durham, NH. Marrying a wealthy farmer who then died, leaving Richers a wealthy widow. Richers traveled and stayed in Germany to master the language. Returning to the United States, Richer settled in Washington DC to study law. And in 1882, she took the bar with 18 men and she outranked them all. Richer's career in law was outstanding and for many reasons; in terms of social justice,known as "the prisoner's friend" she understood that many prisoners were there because of lack of funds for a good lawyer and fines that filled the prison with people who were not criminals, but poor. Visiting the prisons, taking on cases,applying for releases and if Richer could not be present for the trial she would pay for proper counsel. To handing out reading materials and other comforts. Taking on the "Poor Convicts Act" proving the fines were illegal.
1884: Appointed examiner in chancery by the Supreme Court of the District of Columbia and U.S. Commissioner in which Richer heard many cases.
1890: Opened New Hampshire bar to women when she was admitted to the bar of the state.
1891: Admitted to the bar of the Supreme Court of the United States.
1910: Ran for governor of New Hampshire.
And of course, a life member of the National Suffrage Association. Served as Vice president at large of the National Legislative League and president for the state of New Hampshire.
And as an author, Richer published several "free thought" books: "The Four Gospels," (1911); "I Don’t Know, Do You?" (1915); and "I Am Not Afraid, Are You?" (1917).And like her name Marilla Richer lead a rich life.
Posted by beingwoman at 10:26 AM